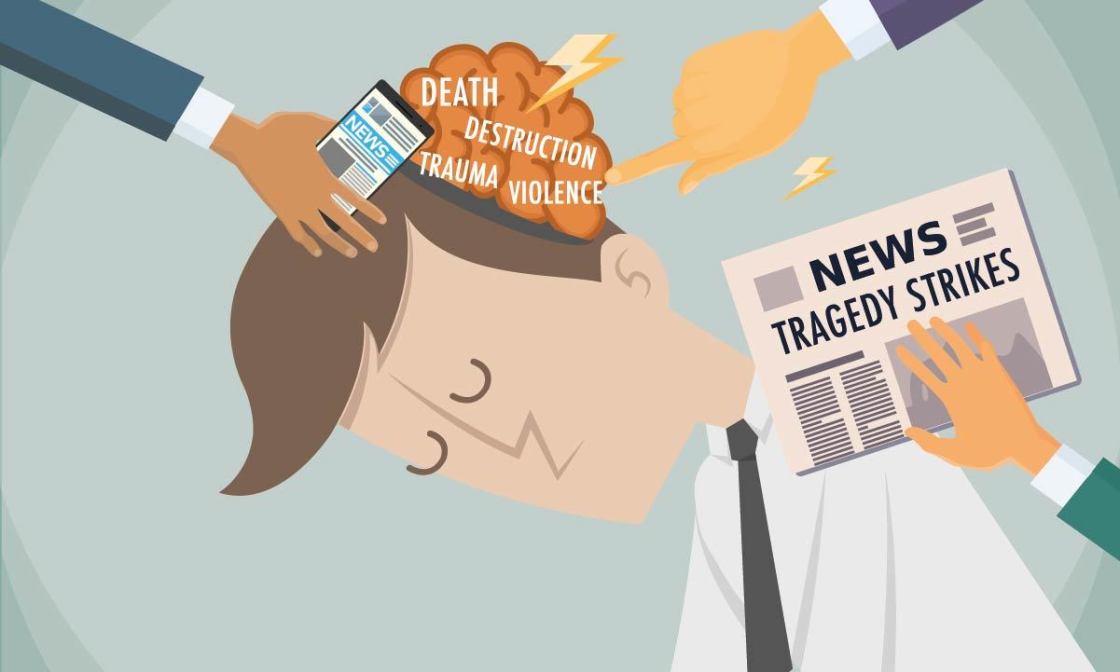 Disaster strikes and journalists report on it. But does anyone ever ask if they are okay afterwards?

Its a common case of PTSD, except no one expects it from a journalist.

The reporters are alongside our police officers and firemen who are on-scene first. As a consumer we want the scope, but can we ethically put our journalists mental state at risk? A court case between a media company, “The Age”, and journalist YZ (cannot be named) sued for negligence as, The Age, failed to protect the psychological well-being of its journalist. (Yates, Napier-Raman, Lewis and Murphy, 2021) In the last decade alone mental health conditions have risen by 13% worldwide, but along with this, there has been a collective rise in recognition that mental health issues are real, and help/ strategies need to be put in place to help people in need. (Mental health, 2021) Which is why this case is so significant, when journalist YZ spoke out about their psychological trauma, they got moved from the crime reporting unit to the sports desk and then back into the Supreme Courts unit. This shift was evidence of how little, The Age actually cared for its workers.

Reporting disastrous and traumatic events is apart of a journalists job, it has been particularly relevant in the past few years when reporters were on the scenes at COVID hospitals, the Australian bushfires, the Australian floods. It is apart of the job description to be on scene in times of crisis. But after a while of talking to victims that have suffered tragic loss, a professional wall begins to build which helps in interviewing the survivors. It is after a while, that this wall starts to impede on the journalists own lives and trauma. “No one is above having a human reaction.” (Dart Center, 2021) But this wall is stopping the journalist from recognized there reactions as relevant, which creates a bottle up effect.

Natalee Seely commenced a study on the trauma in the journalism industry, and noted that they can experience, “a type of indirect, secondary trauma through the victims they interview and the graphic scenes to which they must bear witness.” (Seely, 2019) Dworznik-Hoak did something simillar, as he interviewed 30 jounralists who covered a Texas hurricane in August 2017. The results; “1 in 5 met the threshold for PTSD… 2 in 5 met the threshold for depression…” Guilt, frustration, the feeling of being overwhelmed and crying were common factors in all 30 of the journalists. (How journalists’ jobs affect their mental health: A research roundup, 2021) The statistics are clear, and logically it makes sense. So is brings forth the ethical question, of how far do we push our journalists well-being so we can keep informed.

Focusing in on the court case of journalist YZ and The Age, it is clear to see how well-being and trauma, if not looked after, can escalate. The plaintiff claimed that the exposure of traumatic stress that they experienced was known or ought to have been known about by the defendant, which thus lead to the development of psychological injury and PTSD. Journalist YZ worked in the crime unit between 2003 and 2009, but it was the murder of Darcey Freeman that made her reportedly say, “I’m done, I can’t do this anymore. I have had enough of death and destruction.” Which lead to a transfer to the sports newsroom, lasting until April 2010, in which she was convinced to work as a court reporter, again covering crimes and tragedy in the Supreme Courts. YZ reported there until 2013. (Rizzi, 2020) Forcing journalist YZ to take the age to court.

The judge’s decision “…held that they type of harm suffered by YZ was foreseeable and within the scope of The Age’s duty of care.” (Rizzi, 2020) Again claiming that pro activeness was lacking in the approach to helping journalist YZ. The plaintiff won $180,000 in damages due to The Age. But the issue of PTSD is still at large in the world of journalism, and it comes down to the ethical stand point of sending reporters out so we can then gain the scoop and stay informed.

The post traumatic stress builds up over time from a term, moral injury.  “Moral injury refers to the damage done to one’s moral conscience or one’s moral compass by perpetrating or witnessing or failing to prevent acts that transgress your own moral set of beliefs.” (Willman, 2021) This injury can come from any place in reporting, whether it be reporting on COVID-19, high school shootings, murders, homicides, war zones, terror, fires, natural disasters. The list could go on, because it is about our own moral compass and where we draw the line. Which then brings forth the classic, do you report on the tragedy, get the word out and let people know what is happening, or do you save/help out?

The term moral injury, also brings forth the idea of morals and ethics, which thus ties into if it is morally just for us to demand information if it is going to be obtained at the cost of the journalists mental well-being. The authors; Anthony Feinstien and Hannah Storm of report; “The Emotional Toll On Journalists Covering The Refugee Crisis” note that the trauma can create a “significant stumbling block” to reintegrate with society. “… it is not just the visual exposure to the horror alone that is debilitating, but the compromise of one’s own moral compass can undermine the well-being of media practitioners.” (Ricks, 2021) Linking this back to the case study, it is clear that even after a year of journalist YZ reporting from the sports desk they still had unresolved issues mentally. So when put back into reporting on crime through the Supreme Courts journalist YZ was forced into a voluntary redundancy.

The case between The Age and journalist YZ is rare, one that generally isn’t won by the plaintiff, but is an excellent example of how trauma and tragedy can lead to unresolved issues for the journalist. An ethical balance needs to be established and understood, as both the reporter, agency and consumer all contribute. Our need for the story, and a journalists need to report shouldn’t be held higher then one another, rather a balance needs to be found that assists and supports the mental well-being of the journalist which allows for them to enjoy there job whilst keeping the consumer informed with the current events.

Ricks, T., 2021. What is moral injury, and how does it affect journalists covering bad stuff?. [online] Foreign Policy. Available at: <https://foreignpolicy.com/2017/09/07/what-is-moral-injury-and-how-does-it-affect-journalists-covering-bad-stuff/&gt; [Accessed 5 June 2021].